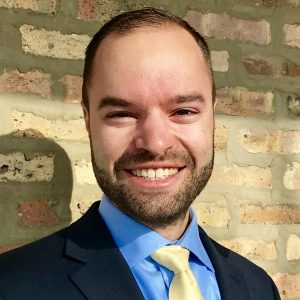 Brian Baxter is a musician and orchestra manager who composes music inspired by family, place, and poetry.  Lawrence A. Johnson of The Classical Review has described Brian’s music as “smartly scored and makes effective impact with economy of means.”  He writes primarily chamber, orchestral, and vocal music.

In a collaboration with Shara Nova (aka My Brightest Diamond), Brian co-wrote orchestral arrangements of My Brightest Diamond’s music for a concert featuring Shara with the Chicago Youth Symphony Orchestra at Millennium Park’s Jay Pritzker Pavilion in Chicago (August, 2011). At South by Southwest in Austin, Texas, Brian’s music and performance was featured as a part of Gabriel Prokofiev’s NonClassical Showcase at the Velveeta Room (March, 2011).

Having co-founded the Chicago Composers Orchestra in 2010, a group dedicated to the performance of orchestral music by living composers, Brian served as Artistic Director and Board of Directors President from its founding through 2017, overseeing all aspects of the organization. In this capacity, he has lead the development of this organization from incorporating as a recognized 501(c)(3) organization to producing seven consecutive seasons of dynamic and financially viable performances and events.

Brian’s passion for new music is equaled by his passion for arts administration, specifically orchestra management. Brian currently serves as Executive Director for the Quad City Symphony Orchestra located in Davenport, Iowa. He previously worked for the Chicago Youth Symphony Orchestras where he served as Chief Operating Officer.

Brian holds degrees in music composition from Roosevelt University’s Chicago College of Performing Arts (M.M.) and Illinois Wesleyan University (B.M.) where he also minored in Business Administration.  He has received seven consecutive ASCAP PLUS Awards from 2009-2015.  He is a member of the American Society of Composers, Authors, and Publishers (ASCAP), the League of American Orchestras and is a member of the Recording Academy.

To contact Brian, send an email to brian {at} brianbaxtermusic {dot} com.